This year it was the 30 of transmedialee anniversary and on this occasion, the festival of digital art and culture has extended its duration from a weekend to a whole month with an extensive program of conferences, workshops, exhibitions and excursions organized between the 2sd and February 5e March. Since its inception in the late 1980s as a video festival, transmediale has grown into one of the premier new media art festivals in recent years, attracting nearly 25,000 visitors. This year the theme was still elusive, inspired by the way in which technology has become inseparable from our daily lives.

During the opening weekend between 2sd and 5e In February, several conferences, screenings, presentations and workshops were organized for an audience of new media theorists, artists, students and curators. Anyone outside of these categories – perhaps visitors with a fleeting interest in digital art or a preference for a more hands-on approach – would find the conference program less accessible, with many sessions engaging the theme of the festival at a meta-theoretical level. Likewise, the film program focused on predominantly experimental work spanning video production from the 1960s to the present day, culminating with the German premiere of the film by Metahaven. Sprawl (propaganda over propaganda) in an auditorium crowded with 1,000 people. This acted as a conceptually heavy counterweight to the much more accessible audiovisual show Lexachast, this year’s joint CTM-transmedial collaboration. 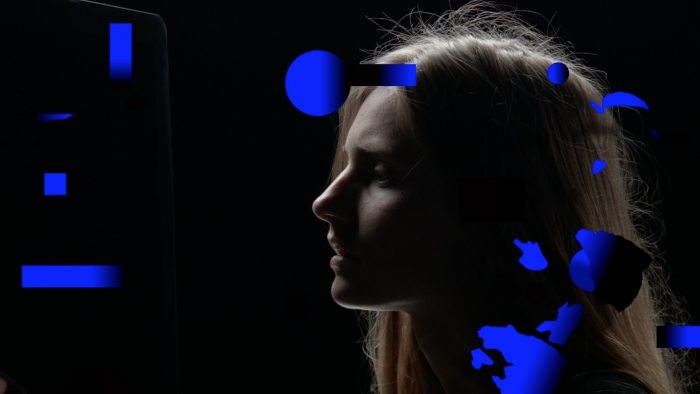 The foreign matter The exhibition weaves together the themes of artificial intelligence, plastics, infrastructure and the Internet of Things, all merging into the great machine and, taking inspiration from Günther Anders’ philosophy, becoming obsolete. 30 artists from Berlin and beyond explore the evolution of our power structures, wondering if our current environment has ever become “foreign matter”. This is defined by conservatives as “Artificial matter, and at the same time, radically different, potentially intelligent. It is the result of a naturalization of technological artefacts.

Perhaps nothing embodies the idea of ​​the obsolete future better than the work of Joep van Liefland. Palace Video # 44 – The Hidden Universe (2017). The sculpture is made up of stacked shelves of VHS tapes, now dead media, highlighting the rapid transformation of once high tech into an obsolete 1980s relic. To pay homage, simply step into the sculpture and the lime green you will bring back to the VHS video culture of that time. 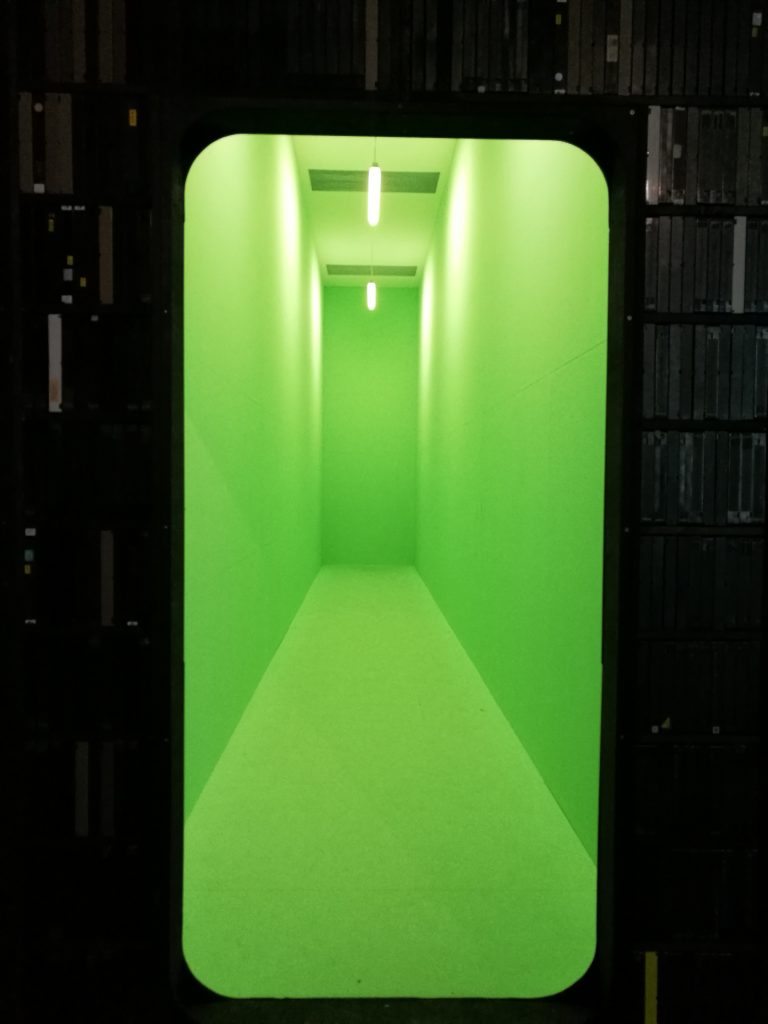 Applying a futuristic perspective to the material of data, Jeroen van Loon An Internet (2015) provides an ephemeral contribution in the form of smoke. In a future internet world of glass tubes arranged according to the distribution of submarine internet cables, the names of the 280 cables turn into binary smoke signals that enter the tube network as temporary data. The smoke fills the tubes until there is no more room and it escapes, a physical representation of a potential future internet, where data is no longer stored for the future, but instantly accessible then gone forever. 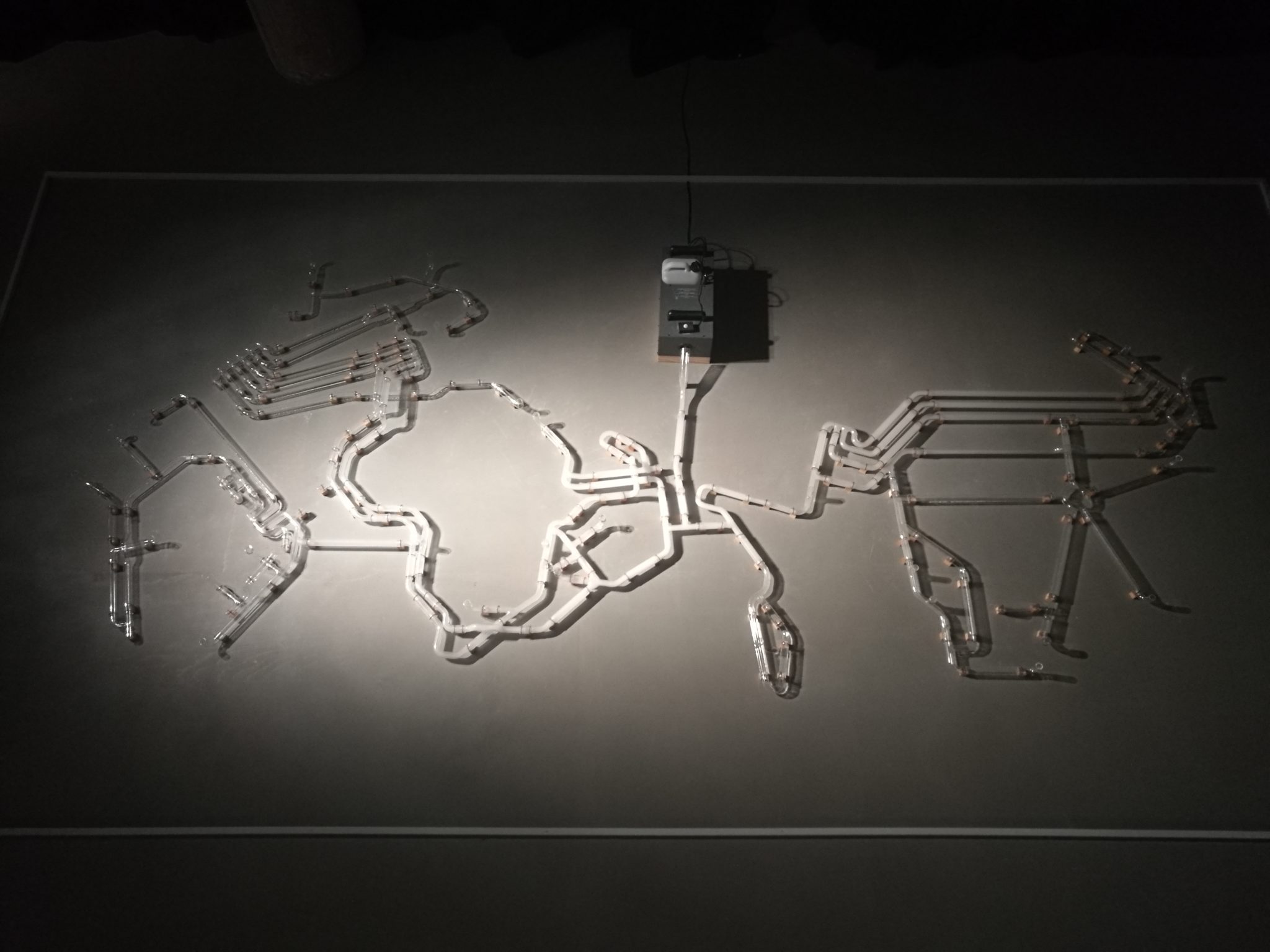 Several works in the exhibition have gone beyond mastering the themes at a conceptual level, instead inventing whole new complex worlds to convey their visions. These include the work of Suzanne Treister HFT the gardener. It consists of several bodies of work created by the fictional character Hillel Fischer Traumberg, a high frequency algorithmic trader (HFT) with an obsessive interest in psychoactive plants. He uses gematria (Hebrew numerology) to map the numerological equivalents of botanical names of plants with the companies in the Finanical Times Global 500 index. In this way, Traumberg fantasizes about himself as a techno-shaman, transforming nature. hallucinogenic capital in new art forms. Through the narrative of a series of seven works and a video, Treister connects the worlds of global financial markets, botany and art brut to present today’s hyper-network structures, the meli -mix of disciplines, cultures and spiritual traditions as well as the experimental nature of their products. . 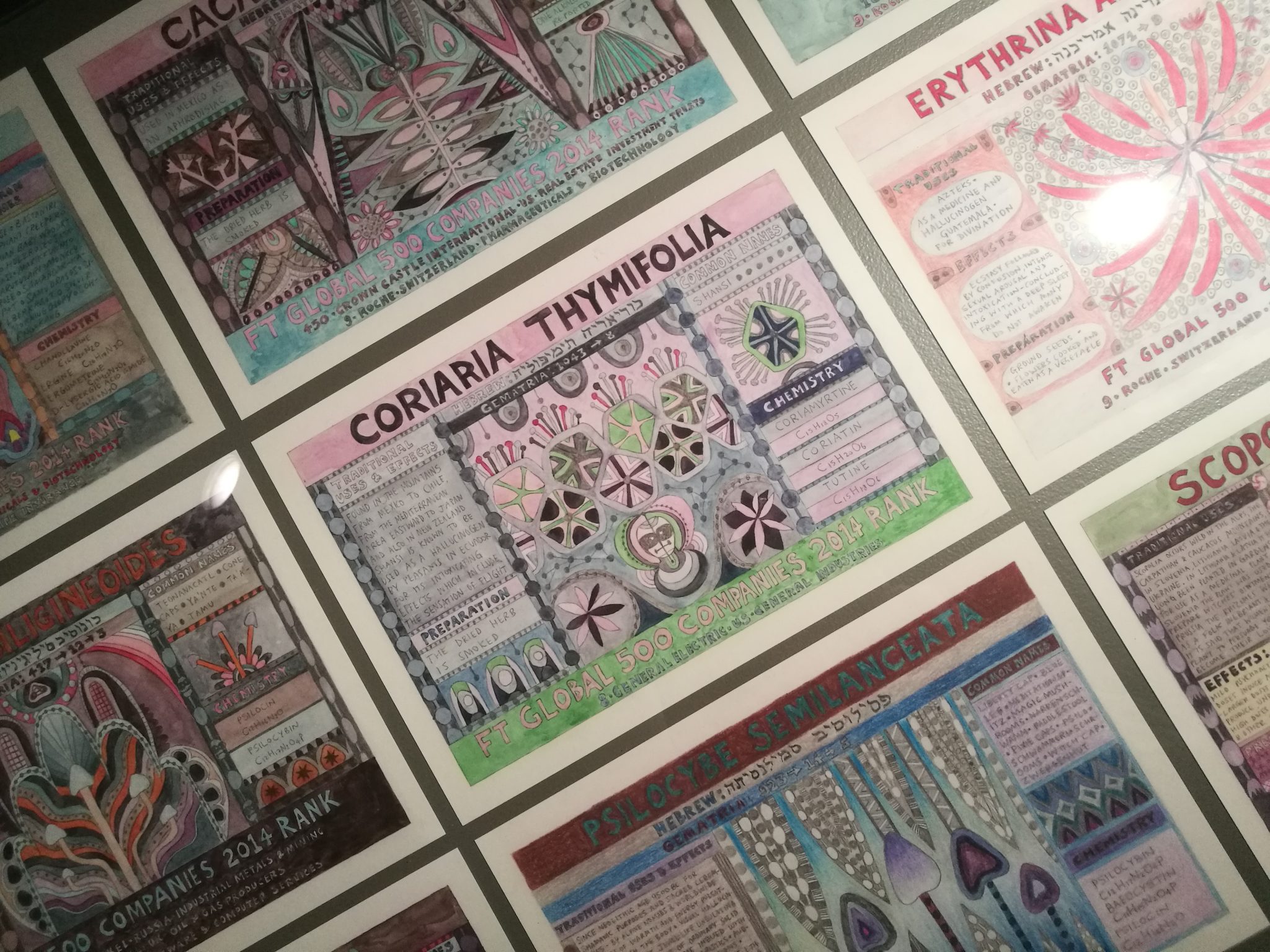 What would an exhibition on contemporary media be without a cat? Here we have Pinar Yoldas’ Artificial intelligence for governance, Kitty’s AI, (2016), the conceptual dream of half the internet – a 12 minute video of a future ruled by a cat. This 3D animated kitten is believed to be a form of artificial intelligence that took the world by storm, ruling the megalopolis in 2039. Speaking from its future perspective to our current state, the cat details the impossibility of solving our current problems, including the refugee crisis and climate change. Pinar Yoldas adds a touch of entertainment to appease cat fans – to listen to the talking kitten you have to become one yourself. Don’t worry, it’s not difficult. Just put on the headphones with the bright blue cat ears and listen to your cat species tell you about the future. 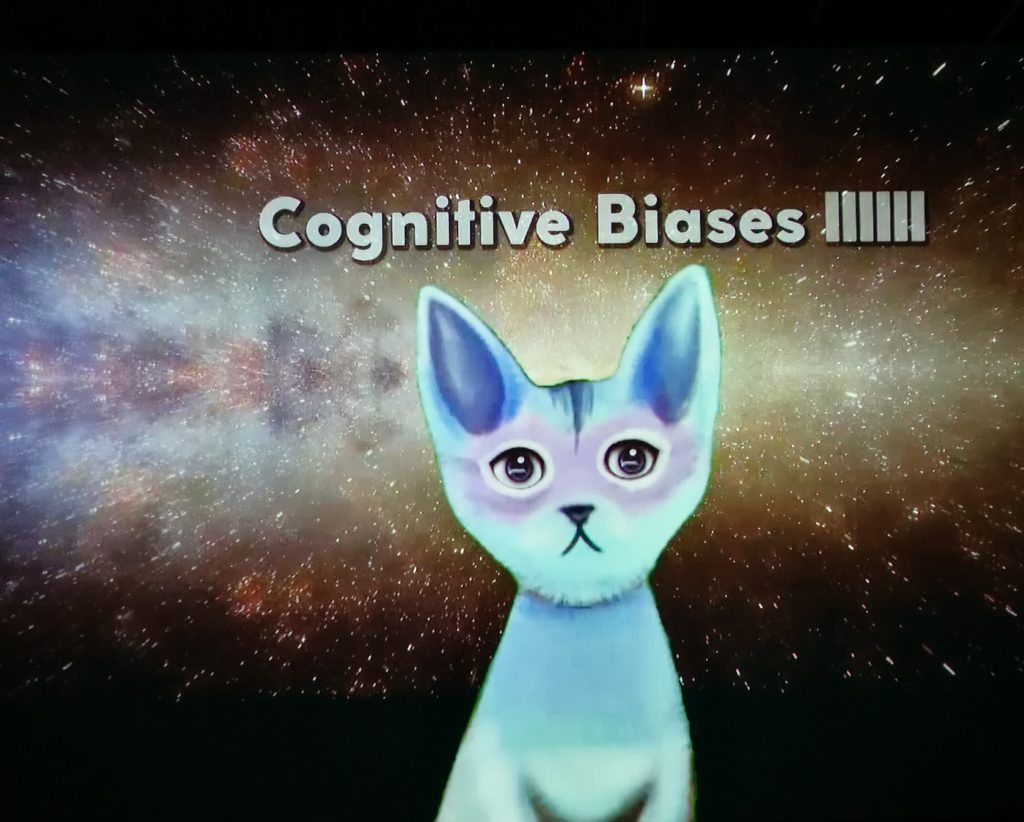 Inspired by the recent trend to generate text using neural networks, the exhibition presents the works of Sascha Pohflepp Recursion (2016), in which performance artist Erika Ostrander reads machine-generated text about humanity. The Neural Network has been trained on texts that draw on everything from human biology and psychology to philosophy and pop culture, including works by Sigmund Freund, The Beatles, and Brian Eno. Next, it was asked to generate a text starting with the word “human”, creating a feedback loop between us and the artificial other. 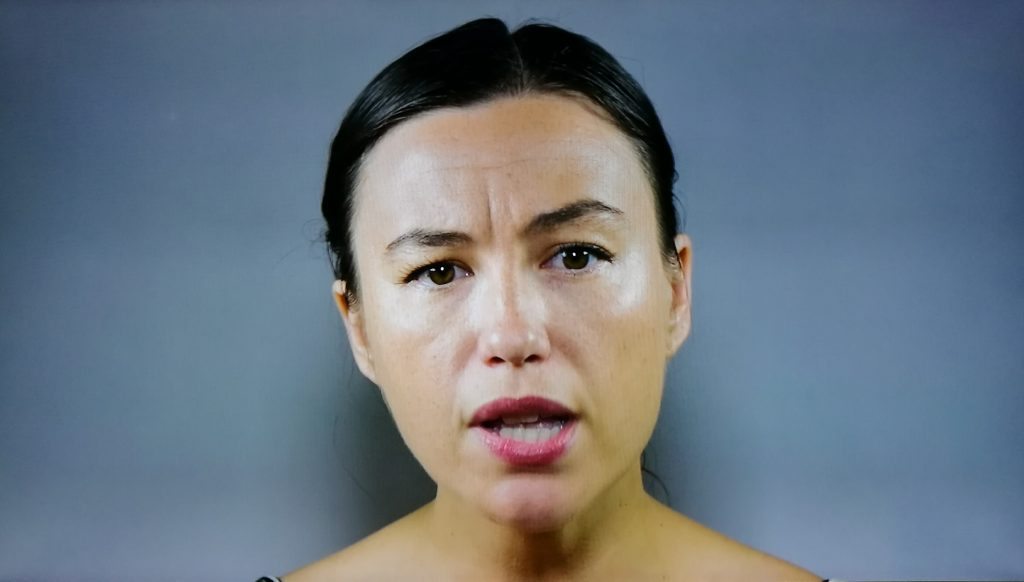 Perhaps one of the most technically unusual applications of neural networks was Constant Dullaart‘s DullDream (2017). Using convolutional neural networks, typically used for facial and voice recognition, it plays on the DeepDream phenomenon, whose algorithm intensifies the specific characteristics of an image, adding eyes and animals to places where there is none. has none. So while DeepDream intensifies patterns, DullDream does the opposite: it reduces the specific characteristics of formal shapes found in the image, making pattern recognition more difficult for regulatory purposes. 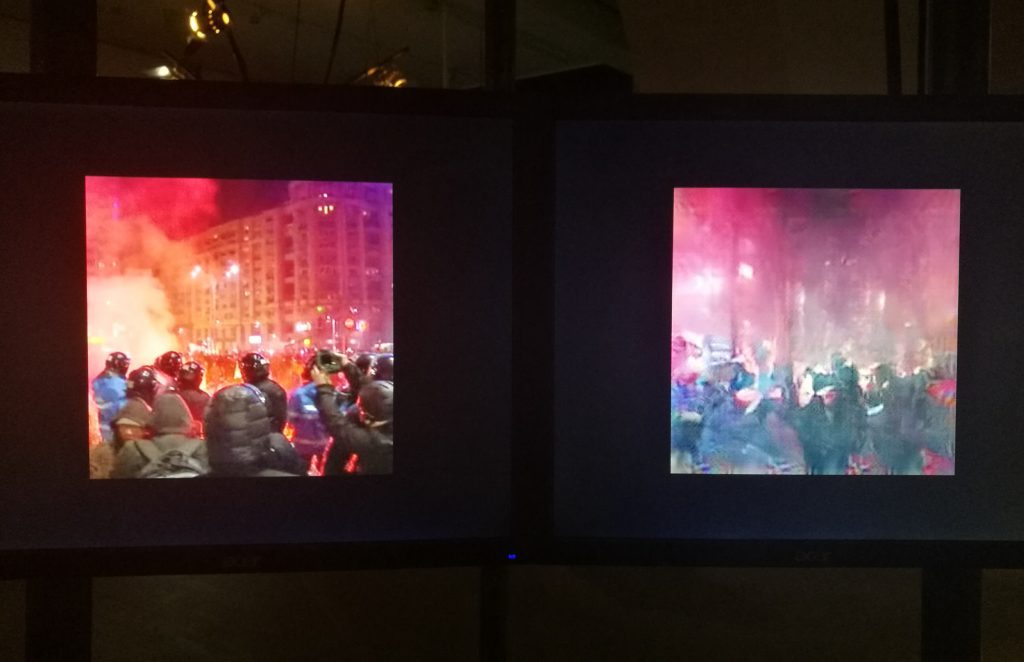 Overall, transmediale tackled relevant cultural, technological and artistic trends well and was a theoretical paradise for the new media scholar. For the rest of us, the foreign matter the exhibition and some audiovisual performances provided a more accessible entry point into the always elusive intersection of nature, culture and technology.

The exhibition on extraterrestrial matter is open until 5e March 2017 at the Haus der Kulturen der Welt in Berlin. The Transmediale entertainment program continues until March 5.

Summerfair Art Festival gives back to the community