Gives artists the freedom to experiment with new bodies of work

The Palm Springs Art Museum has announced a new program called Outburst Projects, which are small-format exhibits that artists create after a month-long artist residency at the museum. The program is designed to support creative exploration, allowing artists to experiment with new bodies of work. The first two participating artists, Mr. Wash and Devin Reynolds, will be featured in Outburst from March 31 to July 3, 2022; two other artists will participate in the second iteration of the program from August 4 to November 6, 2022.

Mr. Wash (Fulton Leroy Washington) is a self-taught artist who learned his trade while serving 20 years to life in prison for non-violent drug-related offenses he did not commit. His first subjects are his fellow prisoners, often represented free and dressed in civilian clothes.

Many of his paintings include elaborate allegorical elements. For example, he often depicts his subjects with large tears streaming down their faces to represent their inner life, the source of their pain and fears. In his painting Emancipation Proclamation (2014), produced while he was still incarcerated, he depicted himself in prisoner attire seated in front of President Barack Obama and his cabinet; a reference to a famous portrait of Abraham Lincoln. Mr. Wash credits his 2014 painting with attracting the attention of then-President Obama, who commuted his sentence and granted him clemency in 2016. Born in 1954 in Tallulah, Louisiana, Mr. Wash Wash lives and works in Compton, CA. His work was recently featured in the group exhibitions Shattered Glass at Jeffrey Deitch Gallery in Los Angeles and Miami Art Basel 2021, and Black American Portraits at LACMA. Mr. Wash will create a new sculptural installation for Outburst following his residency. 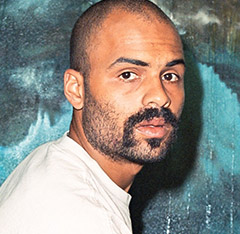 Los Angeles-based Devin Reynolds typically creates paintings that incorporate language and evoke the handmade signs and advertisements of post-war America. With typography and style that evoke a sense of nostalgia, the work balances its romanticism by raising powerful questions related to poverty and racial justice.

Born in Venice Beach in 1991, Reynolds spent much of his youth surfing and working as a deckhand on a sport fishing boat. He studied architecture at Tulane University and found a path to painting through his work as a sign painter and graffiti artist. For his project in Palm Springs, Reynolds explores his relationship with the desert context, expressing a “tangible connection” to an environment he sees as “both treacherous and yielding.”

Outburst will be part of a two-day opening celebration event on Wednesday April 20 and Thursday April 21. The Spring Exhibits Presentation Dinner on April 20 is an intimate affair. The opening celebration night on April 21 will feature an open bar, past appetizers and special guest DJs. The two evenings will celebrate not only Outburst but also the openings of the exhibitions Leon Polk Smith: 1945-1962 and Gonzalo Lebrija: Miracle of the Eternal Present, as well as Pattern Play: The Contemporary Designs of Jacqueline Groag at the Center d’architecture et de design du Museum. , Edwards Harris Pavilion.

Graeme Flegenheimer is the Curatorial Advisor for the Outburst Program.

At the dangerous passage of the art museum, Philadelphia promises new signage